Sending love to someone who changed my life

After receiving the wonderful news last night of a friend now in full remission, I read on Twitter today that Gill Deacon - host of CBC Toronto's "Here and Now" - will be off in order to receive treatment for cancer. It made me sad to read that. It was one year ago this week that I had a chance to meet and speak with Gill on the show, and it changed my life.

I suppose that sounds dramatic, but allow me to continue. My pre-interview with a lovely producer involved what I thought was a lot of talk about my new head, which ended up making me a bit nervous about going on the show. Don't get me wrong. I was thrilled that a high-profile show in Canada's largest city on our national broadcaster was interested in speaking with me, but I wasn't interested in talking a lot about my neurosurgery. I had just released my new album, and was hoping to put the past behind me and focus on the music. I wondered if there might be too much talk about my health, distracting people from the music, and I remember saying that I didn't want to be defined by my head.

Even though the producer had explained that it wouldn't be that way, pointing out the positive things that could come from my story, I still felt nervous right up until I met Gill. She is a cancer survivor, and she told me she knew exactly how I felt, not wanting to be defined by her health. It was that few seconds that put me completely at ease. She led our conversation beautifully, making me feel very comfortable sharing my story with her. In what I think makes for a great interviewer, she made me forget that there was a microphone in front of me, giving the impression that the two of us were simply having a conversation, without any sort of audience.

But there was an audience. People listened to our conversation. And Gill making me feel so comfortable made some of those listeners believe that I might be comfortable having that conversation in other places with other people. And so it became that I started to tell my story and share my music at brain injury events. I started to speak about things like perseverance, resilience, and mindfulness in schools with students ranging from elementary to post-secondary. And it turns out I really love those "shows". My concerts have always involved a lot of storytelling, but this is different. Here, it's the song that supports the story, not the story setting up the song.

I have Gill Deacon to thank for helping me find that. Her empathy for where my head was at (I had to) earned my trust, and she guided my sharing to a balance of information, personality, and vulnerability. It's a testament to her talent as an interviewer, but more importantly to her nature as a human being.

Sending Gill my love and best wishes while she's off, I will wait anxiously but patiently for her to return and help other people tell their stories...and hopefully our next photo together will feature the top half of my left eye and my hat. 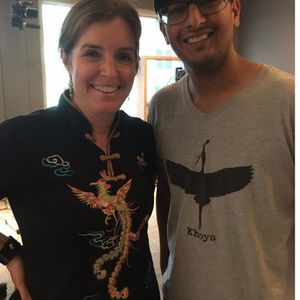